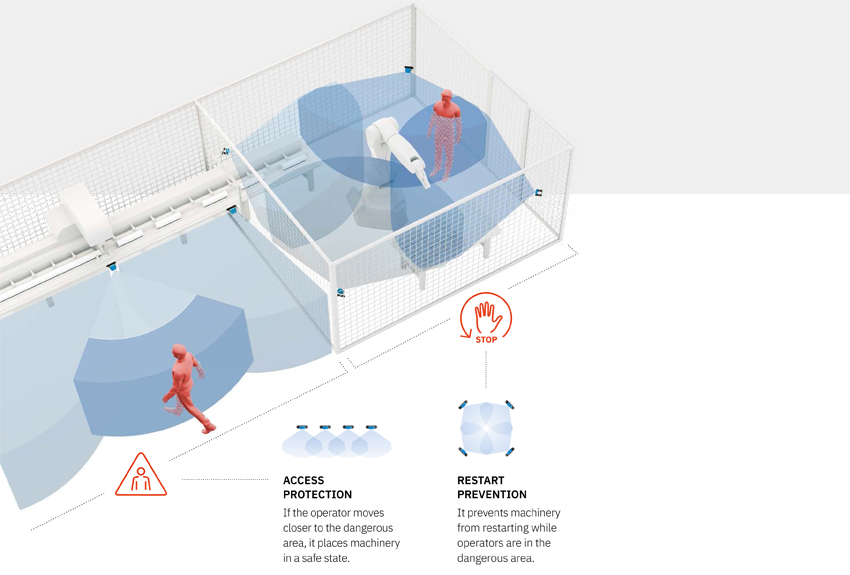 IMPROVE THE COMMUNICATION WITH THE MACHINERY
The modular fieldbus in Inxpect Systems allows Inxpect sensors to exchange safety data, such as the position of the target, in real time with the machinery’s PLC. This allows an effective integration with the machinery’s control system.

SECURE CONFIGURATION
Whether you chose USB or Ethernet for configuring Inxpect Safety Radar Systems, we got you covered. In all cases, Inxpect control units and the Inxpect Safety Application cooperate in full security.

RESPONSE TIME < 100 ms
With response times lower than 100 ms, you can save space and reduce the area required to stop the machinery

Inxpect Safety Radar systems are composed of a control unit and up to six smart radar sensors: high flexibility, from simple to complex scenarios.
Configuring the system is quick and easy, thanks to the user friendly Inxpect Safety Application.
Guided validation procedures and the simple generation of the configuration report complete each installation. 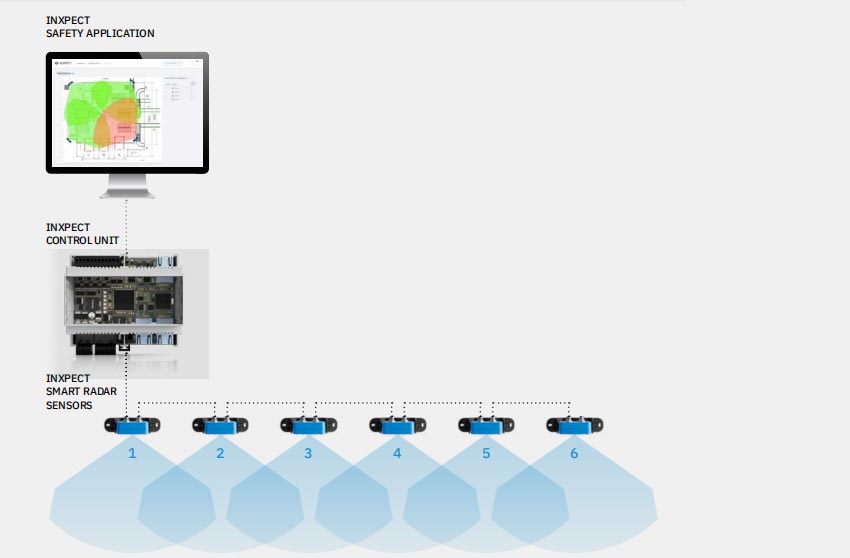 A perfect alignment between sensors is not required.

The provided Inxpect Safety Application allows to manually set up to 32 different configurations to be selected dynamically in real time.

Programmable Muting function: the configuration of sensor groups that can be temporarily muted allows operators to safely access parts of the dangerous area, according to production needs.

The safety radar solution that is easy to integrate

All the power and flexibility of a Fieldbus


The LBK-S01 sensor is a smart FMCW (Frequency Modulated Continuous Wave) radar device based on proprietary Inxpect detection algorithms. The sensor sends radio waves and recovers motion information, analyzing the returned signals reflected by both static and moving objects in the operative range.

The Inxpect LBK-C22 can connect up to six LBK-S01 smart sensors. Intervention of any single sensor results in the deactivation of the safety outputs of the controller. It can be configured with the Inxpect Safety PC application through USB cable connection, which allows the configuration of sensitivity levels, safety functions, size of warning and dangerous areas, and the functionality of the I/O ports of the controller.

SAFETY OUTPUTS
The controller has one dual-channel, force-guided safety relay output for alarms and direct or indirect safety of the machinery.

AUXILIARY OUTPUTS
The controller has two auxiliary relay outputs, which can be configured to signal: pre-alarm, fault, muting status.